Choosing the Right Influencer for Your Product 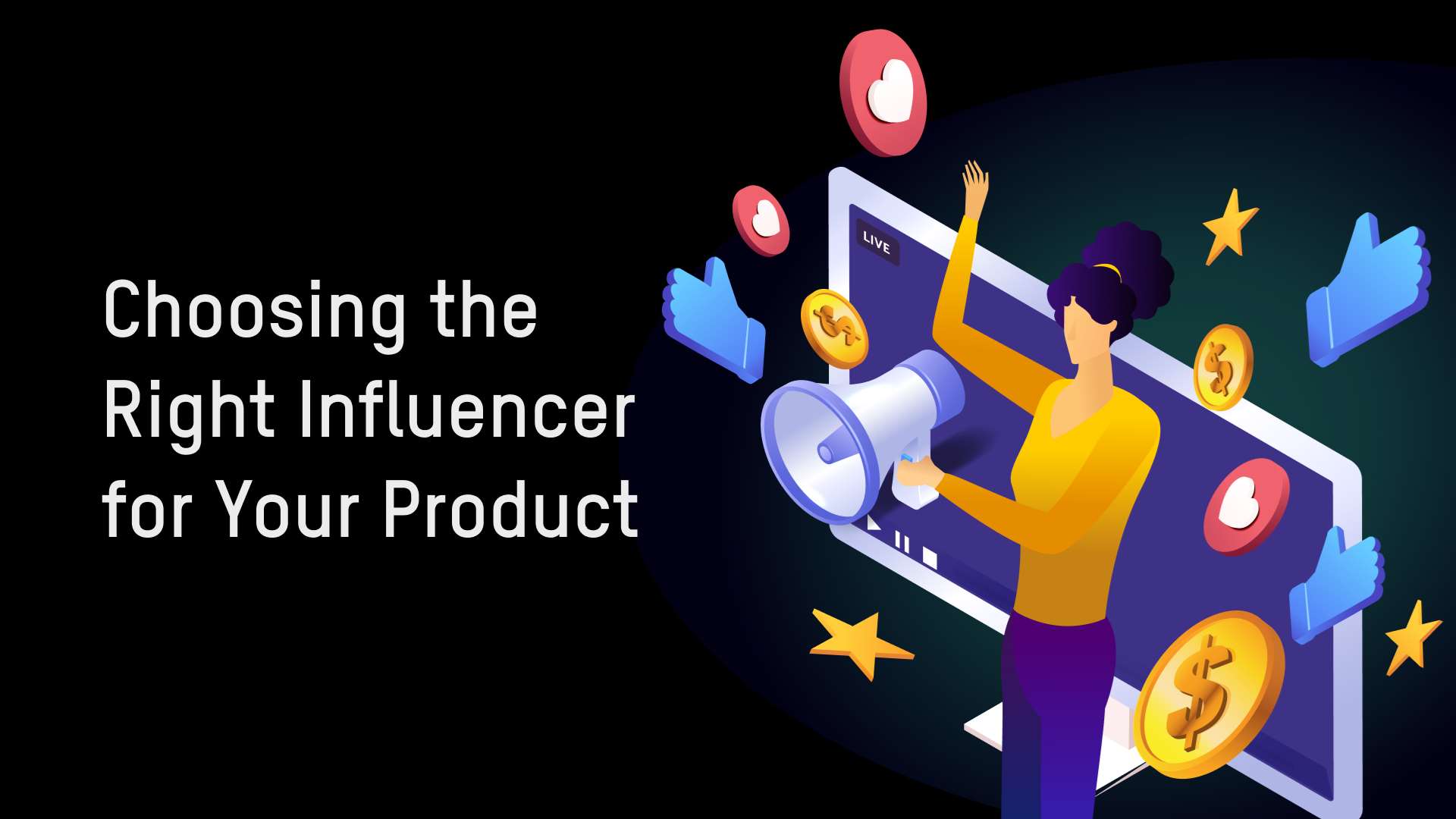 Social media influencers can have an immense effect on the purchasing decisions of consumers. Their knowledge, expertise and carefully cultivated relationship with their audience create a powerful marketing tool.

The phenomenon is relatively young but already huge and still expanding rapidly. More than 3.4 billion people actively use social media -- that's about 45% of the world’s total population.

And whether you’re a fan of the trend or not, marketers are increasingly sold on influencers as an important, even crucial, part of a successful product-marketing campaign. According to Tribe Group, which tracks social influencer trends, about 89% of all marketers say that influencer marketing works just as well as, if not better than, other marketing channels. 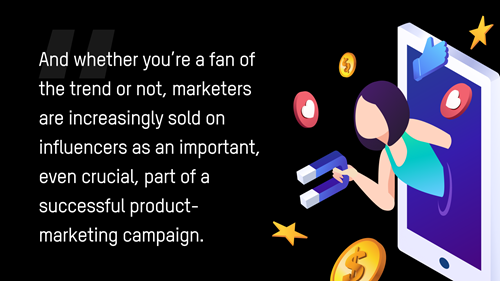 The key to finding the right social influencer for your product is simple: do your homework. Bigger is not always better; for many products it’s preferable to find a niche influencer who specializes in your area rather than someone more high profile (and much more expensive) whose audience might not be the most appropriate for your brand.

Let’s look at the various levels of influencer and gauge their usefulness to different aspects of the marketing world.

Mega-influencers are at the top of the social network food chain. The commonly accepted rule of thumb is that mega-influencers have more than 1 million followers on at least one social platform.

Many mega-influencers are celebrities who have gained their fame in film, reality TV, sports or music. A few mega-influencers, though, got to the stratosphere by being social media stars. Because of their vast reach, only major brands should approach mega-influencers for marketing purposes. They can charge up to $1 million for a single post, and they’re very picky about collaborating.

Almost all mega-influencers employ agents to work out their complex marketing deals. Keep in mind that mega-influencers are usually generalists rather than super-specialists in one area, so only mass marketing campaigns would benefit from their services.

Macro-influencers are less popular but more accessible than mega-influencers, with 40,000 to 1 million followers on a single social network.

Macro-influencers fall into two rough categories. They are either B-grade celebrities, who haven't yet made it to the big time (or are perhaps on the downslope). Or they’re highly successful online experts who have built up more significant followings than the typical micro-influencers. The latter type of macro-influencer is probably a better bet for companies seeking effective marketers.

There are more macro-influencers than mega-influencers, making them easier to work with. They often communicate directly rather than through agents, crafting their own deals and getting to know marketers personally.

A word of warning about macro-influencers: This category is most susceptible to influencer fraud. Fake “followers” are often purchased to bulk up their numbers, making them seem more popular than they actually are. Fortunately, in the past few years influencers and brands alike are placing less emphasis on sheer numbers in favor of an “authentic” following that places value on authenticity and level of engagement.

Read more here about how to spot fake followers:

Micro-influencers are otherwise unremarkable individuals who have developed a niche specialty, giving them a sizable social media following of passionate and hyper-focused fans. Micro-influencers draw between 1,000 and 40,000 followers on a single social platform.

In this category, numbers are far less important than the relationship between the influencer and their followers – something that can’t be faked. Look for lengthy back-and-forth dialogues between influencer and reader and subjects that are re-visited because of their popularity.

A micro-influencer may not know your company or product at all; you will have to persuade them of your worth. Micro-influencers are loath to undermine their relationship with their devoted followers by promoting something that doesn’t adhere to their standards, whatever they might be. For this reason, micro-influencers can be just as picky as macro-influencers about whom they work with and what products they talk about.

In the last few years, micro-influencers have become more numerous, and some of them are finding a surprising level of fame because of the quality and expertise of their platform. This trend is especially true for under-30 influencers and their audiences. The trend lines favor them as the dominant influencers of the future. As the internet keeps fragmenting into ever-smaller interest groups, micro-influencers will gain cumulative importance and could become the field’s most important sector.

As the name implies, nano-influencers appeal to only a very small following, but they’re usually highly respected and qualified in an obscure, highly specific field. In many cases, they have fewer than 1,000 followers, but what they lack in numbers is more than counterbalanced by their passion and level of engagement. You’ll get a lot of feedback about your product with influencers at this level. They can be vitally important to companies who make highly specialized niche products.

For those marketing a sizable product, though, nano-influencers are simply too small to be effective. True, they’re inexpensive, but you would need to work with hundreds of nano-influencers to reach a broad audience.

Now let’s look at the different platforms influencers use.

Influencers in the world of blogs (predominantly micro-bloggers) are usually highly engaged and active with their followers. Successful influencers on this platform, especially the veterans, have developed a high degree of mutual respect with their followers, who are often experts in the blogger’s field in their own right. Blogging is the oldest form of influencer marketing, and many important blogs have been around for 10 years or more. Blogger influencers dominate certain subjects: finance, lifestyle, personal growth, health, parenting, crafts and music are among the most popular.

Some blogger influencers invite others to post as guests. This offers valuable opportunities to market your product, especially if you’re allowed to link to a product page in your post.

Sponsored posts offer another excellent opportunity for product promotion. You’ll be charged a fee for writing the post yourself; sometimes the blogger will write it on your behalf.

Platforms such as Heepsy, Famebit and Fiverr make it easier for you to match your product with an appropriate YouTube influencer. On most influencer-matching sites you can refine your search. For example, Heepsy’s YouTube analytics help you choose the right creators for your campaign or product, check their locations, analyze their views and videos, and get a preview of their channel. Or you can always hire a freelancer from Fiverr or similar services to help you find the best YouTube influencers for your product or campaign.

Fifty-five percent of the U.S. population has listened to a podcast, and 24% listened to one within the last 7 days. As of 2021 there were more than 850,000 active podcasts and more than 30 million podcast episodes, according to Podcast Insights. Podcasts attract loyal followings through their exclusive content, access to celebrities, and advice on practical subjects. Many influencers have leveraged podcasts to grow their brand while educating and entertaining their followers. Search for podcasts that focus on a subject that might make your product a good fit.

According to Influencer Marketing Hub, these were the 10 most popular influencer podcasts in 2021:

2. The Girls Bathroom With Sophia and Cinzia

5. The Waiting Room With Dr. Alex

6. Getting Lippy With... With Imogen Horton

7. Berning in Hell With Hannah Berner

8. The Good Life With Stevie and Sazan Hendrix

10. Peachy Podcast With Niki and Sammy

Of course, bloggers, podcasters and YouTubers know better than simply relying on their existing outlets. They’re constantly promoting their next post on their social media platforms; constant multi-channel self-promotion is essential to success for influencers who want to build a larger audience. In fact, the vast majority of influencers now make their name on social media. While you will find influencers on all the leading social channels, the standout network in recent years has been Instagram, where many influencers craft their posts around a stunning image or arresting video.

A 2021 Forbes article on the rising importance of influencers summed up their importance in today’s market:

“TikTok has become mainstream; podcasts are part of our daily routines; Instagram is now video-first and shopping-oriented. And, wherever possible, consumers opt-out of advertising. We have arrived in a new era of democratic media consumption where consumers choose what they listen to and who they trust.”

At this point, marketers who ignore the power and persuasiveness of influencers are cutting themselves off from the herd.

Do you want to stay in the know about all things marketing?
Subscribe to our monthly newsletter “the Source”
Privacy Policy
© 2022 Rhythm. All Rights Reserved
9860 Irvine Center Dr, Irvine, CA 92618
949.783.5000
Rhythm(tm) - Integrated Marketing. Digital Core