Find out which of these two channels brings the biggest returns to advertisers.

It’s time to put an end to the endless chatter about which social media site is the better platform. We’ve examined both Facebook and Instagram to find out which of the two drives the most engagement, click-throughs, and conversions in paid ads.

Facebook and Instagram are the leading social media platforms for paid campaigns at the moment. Because of their built-in analytics, massive audience base, and multiple format options, these social media sites are considered the best tools for attracting leads, growing sales, and reinforcing digital presence.

Indeed, advertising on Facebook and Instagram is becoming a high priority among businesses. This explains the growth in ad spend allocation in the past two years. In fact, research firm Zenith predicts that social media ad spend will further expand this year to $174 billion and will eventually surpass traditional ad spend. Because of this, advertisers are making the smart decision of investing a larger portion of their budget in this fast-growing sector.

But while these sites are proven to be effective advertising channels in the contemporary world, there’s still much debate about whether Facebook or Instagram is the more lucrative medium. So we’ve looked at their recent performance across key metrics to determine which promises higher success for paid ads. 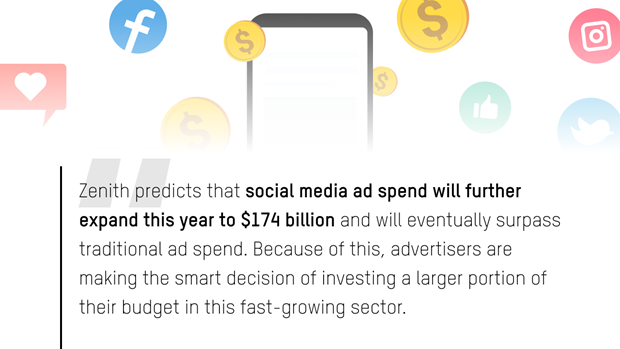 While Facebook has an enormous audience base (more than 3 billion monthly active users), Instagram is more effective in driving engagement when it comes to organic content and paid ads. Based on Rival IQ’s research, the median engagement rate of a single post on Instagram is 1.60%, which is significantly higher than Facebook’s media engagement rate (0.09%).

Since visual content is more interactive, Instagram, a visual-heavy platform, has been shown to generate more participation from its audiences than Facebook, which is geared for text-heavy campaigns. Businesses have noticed more likes, shares, and comments on their Instagram ads, which makes them perfect for brand development, awareness creation, and customer acquisition.

Among Facebook ad formats at present, Facebook In-stream video ads have been shown to yield the highest CTR (0.33%). Apparently, consumers are more likely to click on ads on Facebook videos than Facebook image ads, carousel ads, and Messenger ads. The next top-performing format is Facebook Feed ads, which have an average CTR of 0.29%. Instagram, on the other hand, generates more click-throughs via its Instagram Stories ads with a CTR performance of 0.76%. Meanwhile, Instagram Feed and Instagram Explore ads have an average CTR of 0.69% and 0.47%, respectively.

Apart from its large audience base, the reason why conversion rates are higher on Facebook is because of its more advanced targeting capabilities. Compared to Instagram, Facebook is more precise, specific, and multi-layered. There are also more tools for targeting customers like Lookalike Audience, an audience matching feature, and Custom Audience, a pixel-supported audience tracking feature.

The disparity in revenue can be attributed mainly to the difference in audience size. However, it can be noted that Facebook hasn’t been garnering massive leaps in revenue for the past three years. Instagram, on the other hand, has been seeing fast growth in ad revenue since 2020. Instagram is undoubtedly poised to outpace Facebook in the next year or so as its ad placements continue to soar.

Overall, both social platforms have their own strengths that businesses can capitalize on. Instagram is the best-suited choice for those looking to enhance their engagement, raise brand awareness, and generate a steady stream of revenue from their paid efforts. While it doesn’t have a meteoric following compared to Facebook, it can still drive jaw-dropping results depending on the advertising objective. Facebook, on the other hand, which has blazed the trail for other social media platforms, proves that it’s still the most powerful, all-in-one social media advertising tool to this day. It can generate high numbers across important metrics, from traffic to clicks to conversions. But there’s no denying the promising start of Instagram as an advertising platform. Businesses can benefit from investing in this site now and into the foreseeable future.