Rhythm(tm)
by Rhythm Team in Social

During the Super Bowl, while pacing the room and biting my nails (I grew up in the Bay Area and am and remain a HUGE 49er fan), I found myself taking in more than a great game between two determined teams, but an intense game of wit and strategy in terms of engagement via the brands that advertised during the Super Bowl. No matter how large these advertisers are, $4 million for a :30 second spot is pretty substantial for a small piece of air time. When dropping this kind of cash, brands need to leverage any and all opportunities to further engage the audience, to add legs to their marketing message. Now, does adding a simple #hashtag to your TV spot count? Not so much. Brands had to go a little further than that (even though almost every single ad had a hashtag). Let's take a look at how some of the brands that advertised during the Super Bowl extended their brand experience.

Coke ditched its iconic polar bears to go with a more interactive "choose your own adventure" style campaign with their Coke Chase series of ads. While $4 million may not cause much of a flinch in terms of marketing budget dollars for the soda giant, they still put in the extra effort to get the most bang for their buck. Coke launched their Coke Chase series on Jan. 22nd via YouTube -- easily generating more conversation, shares and traffic way before the big game. And during the game, Coke invited the audience to engage by asking them to vote on their favorite chase scenario via a dedicated site -- Cokechase.com. Now, while there is good amount of backlash around this campaign and a considerable amount of negative sentiment, the brand still caused a major stir and the engagement continues today. Oh, and take a look at how Pepsi responded. You gotta be ready for this kinda mocking when you release your ads early.

Pepsi knew that to increase it's number of fans and drive more engagement online, they needed to incentivize fans to take action. At the end of their :30 spot, they pushed people to go to their Facebook page and to log on to the Pepsi Next website to get a free 2 liter bottle of Pepsi Next. Read more and check out the Pepsi Next spot.

From my perspective, Oreos gets huge kudos for their on-the-fly creativity and incorporation of social. Oreo wanted to kick off the next 100 years for the cookie brand in a big way and securing :30 seconds during the Super Bowl definitely would help achieve this. The last 4 seconds of the commercial were left promoting Oreo's Instagram account -- extending the cookie versus creme conversation from TV to online. This social strategy moved Oreo's Instagram profile from 2,200 followers to 35,000 by the end of the game. And their response to the blackout was timely, humorous and super creative, driving more brands to follow suit and capitalize on the moment (or 34 minutes of dead air time). The tweet below was retweeted more than 15,000 times on Sunday alone. 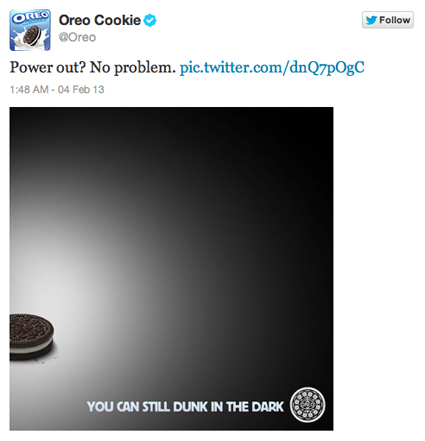 I am still a little chocked up every time I watch the ad. Budweiser and their team of creative masterminds just get it. They know how to move us and make us want to be part of their brand story (even if our part is lifting a cold beer to our mouths while we talk about their ads). They also capitalized on incorporating social by asking viewers to name the baby #clydesdale via Twitter. The repeat views of the spot on Hulu were insane and the talk on Facebook continues today. They also leveraged 9,800 new fans on Facebook post the ad. Take a look at this ad and many of the other top Super Bowl ads.

So, which brands do you think did their best at extending the :30 second spot experience? Which fumbled? And did you happen to Shazam any of the ads for a little something extra?