Star Wars: An Integrated Marketing Force To Be Reckoned With 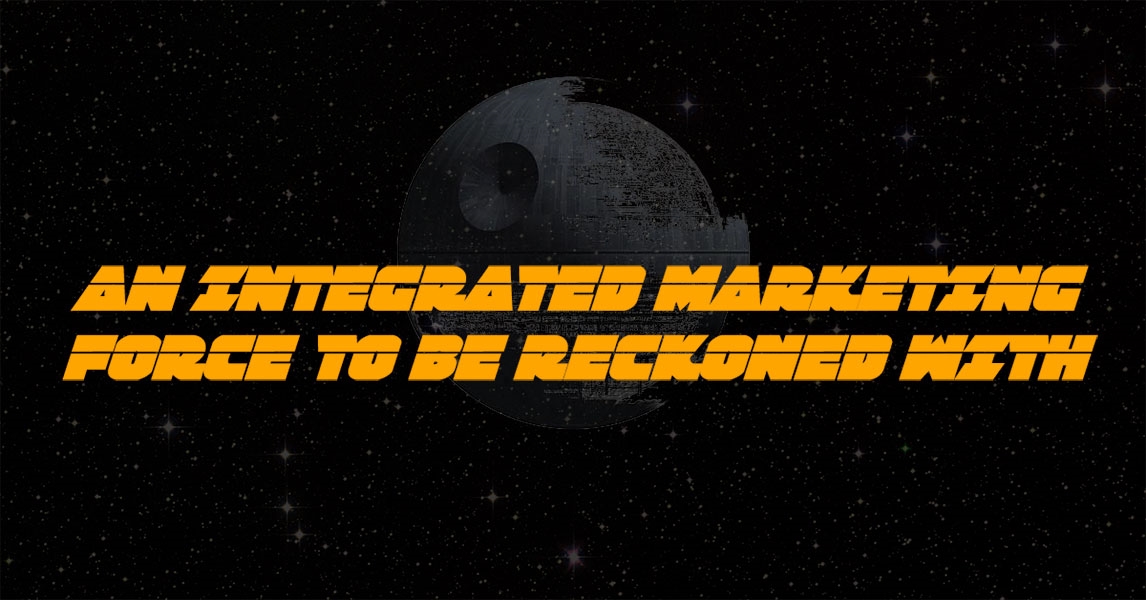 With the world as connected as it is these days - with everything digital and the IoT (Internet of Things) - the buzz around the new Star Wars: The Force Awakens seems is everywhere. Literally, everywhere. Every channel is saturated with Star Wars content. It's really pretty hard to avoid "The Force" in such a digital and connected world. It's not so much Disney self-promoting, but every brand is trying to latch on to the legacy and the monetization power that is Star Wars. I mean a complete makeup line? Really? Wait...I actually like those colors.

I was just born when the first Star Wars film came out and while I know there was early fan pandemonium, the digital age has given Star Wars even more reach, more social emotion has made many feel like they NEED or WANT to be part of this movement just to be connected to something so culturally powerful. The fact that everything is instantly available to everybody, that a trailer is released and five minutes later it’s around the world, viral parodies made, apparel designed and pushed via Instagram and Facebook, in-app ads - there was nothing like that back in 1977. Back then you had to physically go to the movie theater to see a movie where the trailer would be featured and then the chatter would begin.

Star Wars - as an entity and brand - gets how to "integrate" their marketing efforts to reach the most people and give their target audience the unique, special experiences they desire. They mix traditional marketing elements of print, billboards, TV spots, POS signage, billboards, etc. together with the digital components including the Star Wars website itself to individual microsites and specific campaign sites to social channels, paid search and display ads, fan emails, mobile apps and games, etc. Their marketing efforts are integrated excellence of astronomical proportions - a FORCE many brands can learn from.

Here are just a few things to consider...

The Star Wars Organic Search Benefit & Content Strategy
Star Wars’ fans have helped to amplify the brand's content strategy by creating authentic and captivating user-generated content.  The fan base has been able to garner a variety of creative memes around the Star Wars brand. Because of ongoing, engaging user-generated content, they are able to stay relevant to their core customers, the hard-core fan base that has many lines from the movies memorized and know that episodes 4, 5, and 6 came before episodes 1, 2, and 3.

Star Wars dominates the first page on search. No matter the search engine, when you type the keywords “star wars” in the search box, chances are you will see that the whole page is dominated by movie times, news articles about Star Wars, associated social media channels, product lines associated with the brand, etc.

Co-Branding
Star Wars (or the big players behind the films) was one of the first brands to really understand and see the power of co-branding and licensing rights. From some of the initial Burger King Star Wars glass collections to Lego's, makeup lines, Adidas, and even Band-Aid. Star Wars partnered with small mom & pop shops (most likely with more than a mom & pop shop marketing budget) to large, major brands and retailers to ensure "The Force" was strong. As marketers, what we can learn from this approach is that the traditional TV advertising is not the main way to get visibility and awareness for a campaign. Instead, soliciting actual users and influencers and partnering with brands (even those unrelated to your product/service line) can help you reach even more people and help your movement spread like wildfire. Check out this list of 15 bizarre Star Wars branded products.

Technology
Even Google pays homage to Star Wars, I mean why not with "Star Wars" searched via Google 4.09 million times this past month and being one of the top trending searches.  Google launched its own Star Wars site inviting fans to choose the light side or the dark side which then "galaxizes" your entire Google experience across the search giant's many different properties and apps (gmail, YouTube, maps, calendar, etc.) There was also the Google Star Wars easter egg they did that was viral in itself.

From the perspective of an individual passionate about marketing strategies that move audiences, create memorable, lasting impressions and get people to engage, Star Wars has it nailed. Yes, Star Wars is HUGE. Yes, there is a little money behind their marketing efforts. But still, there are many pieces of this integrated strategy that brands can attempt to execute. Put the pen to paper or stylus to iPad and start brainstorming to see how your brand can too become an integrated marketing force to be reckoned with.